In-Dash iPads, available at Abt Electronics, are a growing trend

The home audio industry is one that is continually evolving, constantly creating new technologies to make listening to music easier and more enjoyable. With every new advancement, sound quality increases while device size decreases, and a device standard or physical media often becomes obsolete.

It’s usually not long after the home debut of a technology that we begin to see it implemented in automobile usage. Car stereos have evolved from scratchy AM-only radios, to multi-channel, THX-certified Bluray players, just as our home stereo systems have. Along the way, they’ve made stops at the 8-Track player, Cassette deck, and compact disc player. Carmakers even briefly visited the idea of a dashboard-mounted turntable. And if a skipping CD ever bothered you, you’d probably be endlessly frustrated trying to peacefully play a record in your DeSoto. Let’s just say that in-car vinyl didn’t ever amount to anything.

The last decade gave rise to a new technological beast, however. Today, the majority of our entertainment tasks are handled by a single, powerful all-in-one device, like a smartphone or tablet. An iPad replaces our music player and video player, our computer and more. Media is moving off of physical hardware and into the cloud, where it can be played at any time without having a physical disc on hand.

As these portable devices rapidly evolve, the car audio industry has kept pace, somewhat. Nearly every head unit available today offers some form of device integration, letting you control your iPod from the stereo’s display, or offering a USB port to plug a smartphone in and stream music from. But few include all of that functionality natively, and perhaps none with the intuitive usability of an iPad. Now, however, enterprising mobile installers and their customers have decided to beat device makers to the punch and go straight to installing an iPad or Android Tablet right into the dashboard.

Installing an in-dash iPad presents a clean, multimedia solution with a simple user interface. With an ecosystem that’s familiar to millions of users and is quite easy to learn, in-dash iPads offer drivers and their passengers instant access to the owner’s local library of songs and videos, as well as the wealth of media that a connected device brings. One screen becomes a hub for an endless amount of streamable music, GPS information, up-to-the-minute news and traffic information and anything else you’d do at your home computer. All from the front seat of your car. 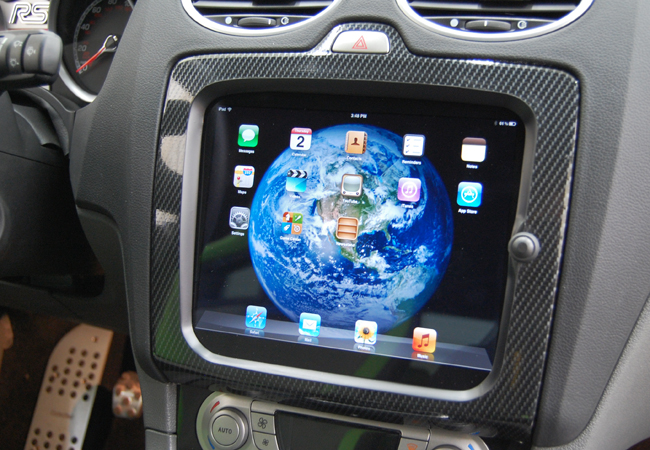 A full-sized iPad installed into a customer’s Ford Focus at Abt Electronics.

A custom installation of an in-dash iPad into a car is, of course, more labor-intensive than replacing a stock head unit with an aftermarket one. The first obstacle is usually finding space to fit the large display, which is larger than even a double-DIN slot. It’s this problem that makes professional custom installation a necessity, since the dash will likely have to be modified, and an adapter crafted from scratch. The tablet will also have to still be routed through an amplifier, since it can’t drive high-powered speakers itself. And there’s also the matter of keeping the device powered, but making sure its constant source of power doesn’t drain your car’s battery when the car is off. 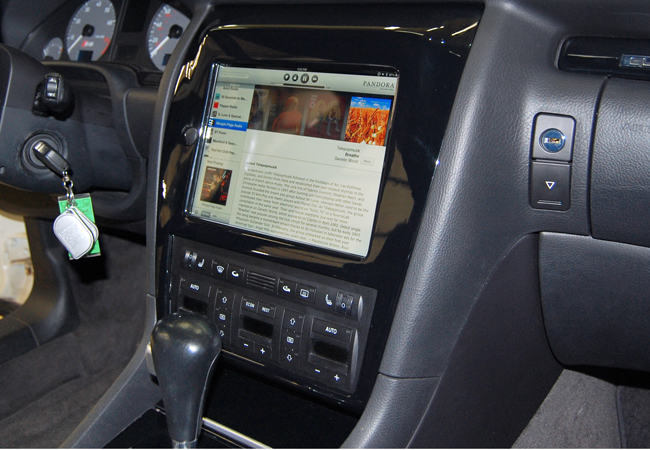 Abt Electronics’ mobile installers completed this seamless integration of an iPad in a customer’s Audi S8.

When it’s all said and done, most users will tell you it was worth the cost, because of the new entertainment and functional options that the dashboard-mounted iPad opens up. A recent article by CEOutook Magazine reports on this trend, with shops (including Abt Electronics’ Award-Winning Mobile Audio Department) installing iPads into cars on a weekly basis. And the demand is only growing as these devices become cheaper, smaller and more prevalent. We hope, however, that this doesn’t end up making drivers even more distracted than they often already are.

Introducing Josh Davis, The Technologist at Abt
Fun Facts About Father's Day
0 Comments
By Pete R