The 2009 International Consumer Electronics Show, the world’s largest consumer technology tradeshow, officially kicks off Thursday in Las Vegas, with more than 2700 exhibitors and 130,000 visitors expected to attend. CES is all about innovation, bringing together the world’s top electronics manufacturers to present their visions of the future and show off the exciting new products that will become available to consumers in the coming year. Previous shows have launched such technologies as the VCR, DVD player, HDTV, and satellite radio. 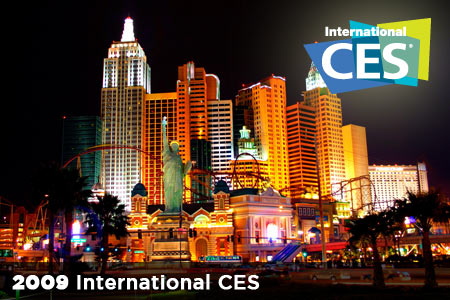 Abt will be represented at the event by about a dozen employees, including most of our electronics buyers and four members of the Abt family. “This is a great way to see everyone from the electronics industry in one place and to see all the new technology,” said company president Jon Abt. “It also gives us the opportunity to bring the hottest new products to our customers as soon as possible.”

As an example of the enormity of the event, most companies have spent weeks bringing in products and displays, with some using more than 50,000 square feet of exhibition space to showcase hundreds of their consumer electronics products. Keynote speeches will be delivered by Sony chairman and CEO Howard Stringer on Thursday, with Intel chairman Craig Barrett and Cisco chairman and CEO John Chambers scheduled for Friday. The pre-CES keynote address will be delivered tonight by Microsoft CEO Steve Ballmer, who was hired by Bill Gates in 1980 and succeeded Gates as CEO last June. Several celebrities also are scheduled to make appearance, including music superstars Akon and Stevie Wonder.

Check back here in the coming days for reports on all the great new gadgets debuting at the 2009 Consumer Electronics Show.  —by Graham W.