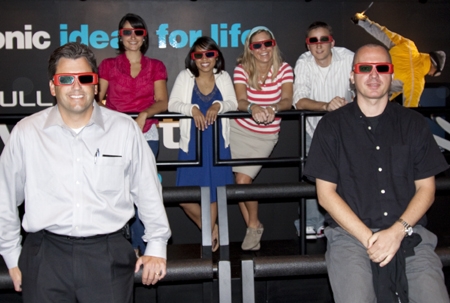 Come to the Panasonic Full HD 3D demonstration in Abt Electronics’ parking lot until 3PM today!!! One of the three Panasonic trucks, currently traveling the country, is in front of the store and will be demonstrating the new HD 3D technology. Previously, 3D had a maximum resolution of 480p and TV can go up to a resolution of 1080p. Now, Panasonic has improved that resolution to 1080p in each eye—that’s 4X better than anything else available on the market.

The prototype glasses that are necessary to view the improved technology have a special computer chip-sensor over the bridge of the nose. The sensor picks up signals emitted from dedicated processors on the sides of the 103” plasma (inside the air-conditioned truck). Each eye receives 240 images per second. The sensors on the glasses receive signals from long-range (movie theater-type) processors (on the sides of the TV). At points during the demonstration, covering the receiver on the glasses with your finger may be necessary to avoid a blurry image. 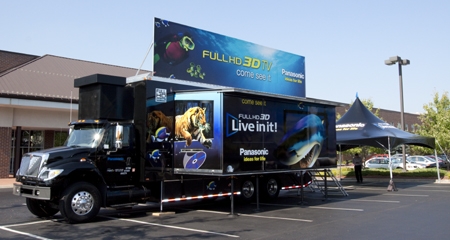 Because this is a demonstration of prototypes, the Panasonic representatives made sure to let us know that when the HD 3D home kit becomes available it will be modified slightly. The glasses will change, the Blu-ray player will be able to play regular Blu-ray discs as well as the 3D type, and the plasma that will be part of the kit will come with the 3D emitter.

The actual HD 3D footage was really cool! While watching the video from Vancouver—site of the 2010 Olympics—skiers swooshed down mountains and it looked like snow really flew at the audience. Another outstanding moment of the video was during a video of the Grand Canyon. Water rushing through the canyon spashed on the camera lens and for a second I wanted to wipe my eyes—it was pretty realistic.

Abt is this Panasonic truck’s second stop—it’s going to Los Angeles when it leaves Glenview. It’s going travel the country for eight months and making about 3-4 stops a week.