Another CES is in the books, and our team has settled uncomfortably back into regular office life with gloomy, snowy, 26° weather outside our windows. As we think back fondly on the hectic week we spent in Las Vegas, here are some thoughts on what made its mark at CES this year.

Smart technology is nothing new. But if there was one overwhelming trend at CES 2018, it was the presence of smart-ness. In everything—not just TVs and house lights and thermostats. Smart, connected tech will be in your next washer and dryer, your next oven and refrigerator, your home air-conditioning unit; you could find it in your next pair of shoes, toothbrush, coffeemaker, blender—even in your next toilet! With the price of the technology rapidly dropping, cost is no longer a factor in making just about everything smart.

This, of course, has its upsides and its downsides. The growth of the digital assistant—Google Home, Apple’s Siri, Samsung’s Bixby, Amazon Alexa—combined with all of these smart products means that you’ll soon be able to control or monitor literally every part of your home and your life from anywhere with a data signal. We’re entering a new era of convenience and efficiency. But that raises the question of how many of these things really need to be smart. There is an inherent security risk in any object that connects to a computer network; it’s another way in for bad guys. People have enough trouble trying to keep their computers secure from malware or hackers. Do we really need to worry about another potential network breach point just so we can have a coffeemaker that responds to the sound of our voice?

Imagine having your identity stolen because someone hacked your smart toilet. 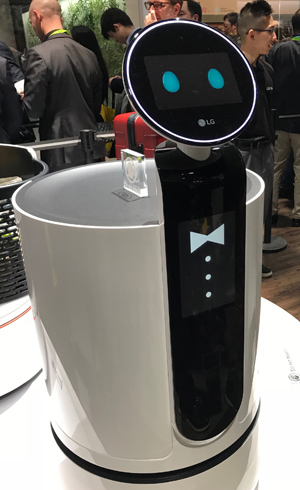 Beyond just being “connected,” this year’s show brought a wealth of products that leveraged some form of artificial intelligence (AI) or machine learning. Instead of just reacting to your input, these products learn your behavior and begin to make decisions based on that behavior. A regular smart TV can take your voice commands to change the channel or fire up a streaming app. But a TV with AI would learn what time you usually watch the news, and which channel you prefer, then take the initiative to turn itself on and tune into that news program at the proper time every day. Or it could interface with your router, notice your smartphone is not connected to your home network, surmise that you’re out of the house, then set the DVR to record your favorite sitcom. None of these are actions you’ve told the machine to do in advance, but instead, by observing your behavior, it made the decision to perform them on its own.

LG’s vision of AI was probably the most complete we saw at CES 2018. Its ThinQ system was integrated into devices in nearly every aspect of the brand’s product offerings, from kitchen appliances to TVs to a trio of conceptual servant robots. ThinQ connects all of your devices together—and to the greater Internet of Things—and is compatible with open source standards, so other parties can join the ecosystem. Products that utilize ThinQ can decide how best to wash your dirty laundry, suggest dinner recipes based on what’s in your fridge, and even transform a robotic vacuum cleaner into an automated home sentry. The most exciting thing about seeing these products debut is knowing that we are at just the dawn of this era, and as more AI-products are embraced, they will constantly learn from their owners’ actions and habits, and continue to adjust their own behavior.

We’re living in the Golden Era of display technology, with access to gorgeous screens on everything from the television in our home theater to the smartwatch on our wrist. Display technology is really amazing right now, and because of that, there haven’t been any “wow” moments for TVs at CES in the past few years. Nothing like the debut of the first flat-panel televisions, the dawn of HD (and then 4K) resolution, or the first consumer OLED TVs. Instead, we’re seeing the slow refinement of those existing technologies; great picture quality getting even better, thin TVs getting even thinner, smart functions getting smarter and faster.

At CES, we saw Sony’s remarkable OLED TVs revamped into a more user-friendly design, the new A8F OLED. We saw Samsung testing the beyond-UHD waters with an 8K display that’s almost ready to hit the market. LG is all in on OLED, imbuing its upcoming models with a high-tech processor that promises picture quality even better than before. So there were no real surprises in TV tech, just a whole lot of impressive products getting better. Of course, one of the nice fringe benefits of technologies maturing is the resultant price drops. A 65″ 4K LED TV for under a thousand bucks was unheard of in 2015. Now, there are half a dozen offerings at that price point.

As the Internet of Things continues to grow, and as more advanced gadgets perform more data-intensive tasks while on it (like the calculations and communications performed by a nation of self-driving cars), we’re going to need a better data network to support them. While not yet a household term, 5G is exactly what you’d guess: the next advancement of wireless broadband. While there’s not yet an official standard set, 5G is set to be anywhere from 10 to 100 times faster than current 4G LTE speeds, along with much lower latency (the delay in communications between devices). Both of these traits will be necessary to power the connected revolution. Samsung gave us a quick explanation while demonstrating their autonomous car telematics system: