For years, bicycle computers have been getting smarter and smarter, adding options like wireless data transmission and GPS tracking, and integrating with a bike’s drivetrain to track gearing and power output. There are countless options on the market, offering increasing levels of features and complexity. The new SpeedX Unicorn smart road bike simplifies everything by baking those features right into the bicycle itself. And if you’re worried about a tech-company focusing on gadgetry instead of bike performance, fret not. The SpeedX Unicorn is a high-tech machine built from the ground up to go toe-to-toe with top-tier racing bikes from the most well-known brands.

The frame, built with industry-leading Toray carbon fiber, offers the ideal combination of lightness and strength—even with a claimed weight of under 2 lbs, the SpeedX Unicorn survives an barrage of pre-production stress tests and comes with a lifetime frame replacement guarantee. Specific engineering methods allow the frame to actually flex at key points to provide a level of shock absorption not available on any other mainstream bicycle. And every SpeedX Unicorn is outfitted with high-end hydraulic disc brakes and electronic drivetrain components from either SRAM or Shimano. In short, it’s as good a bicycle as just about any you can buy today.

And then there’s the suite of smart functions that make the SpeedX Unicorn the most connected bike on the planet. The foundation of the system is the SpeedForce, the integrated Android-powered cyclocomputer with a 2.2″ touchscreen. From here, the rider has access to all data being collected by the bike.

What kind of data does the SpeedForce collect? Well, just about anything relevant to your ride, from elapsed time and overall speed, to calories burned and your max power output. The latter metric is measured thanks to the integrated power-meter. Traditionally, this component is an optional—and usually quite expensive—piece of equipment that a serious cyclist could add to regular bicycle. SpeedX builds one into the Unicorn natively and pairs it with the SpeedForce system to give riders an endless stream of data for post-ride analysis. 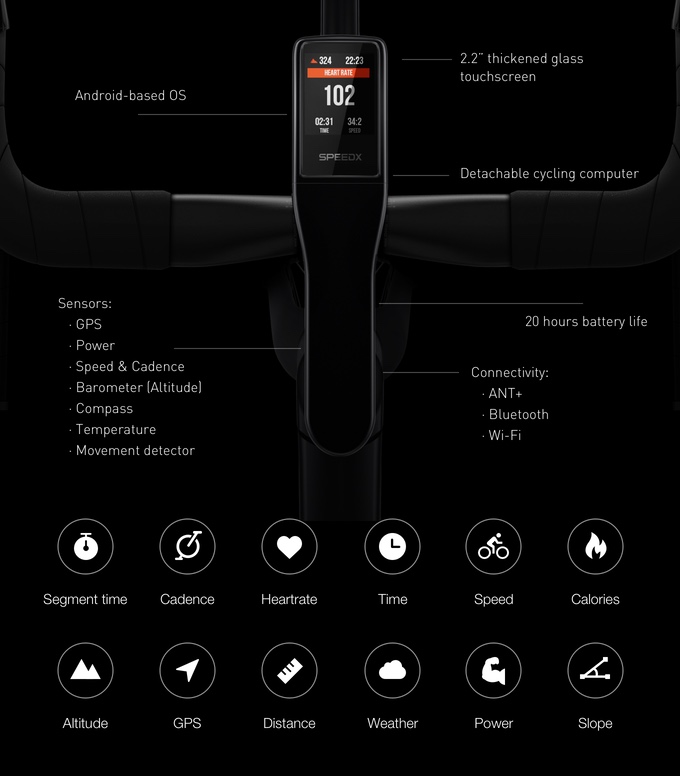 The SpeedX Unicorn smart road bike was announced on Kickstarter, and received full funding yesterday—only 75 minutes after the campaign launched. As of this writing, there were still a handful of open spots for those who want to pledge the $3,199+ for a discounted early-bird model. Otherwise, normal sales should begin around summertime.

The nPower Peg is a portable backup battery for handheld devices that is charged by the movements of your body. Get more CES coverage on The Bolt.

Save On New Year’s Fitness Bundles

Getting fit for the new year? We've got you covered. Check out our fitness bundles that pair exercise equipment with scales, headphones and more.

Looking to upgrade your Jeep? Check out Alpine's latest speaker systems that are built to endure your biggest adventures in your Jeep Wrangler.