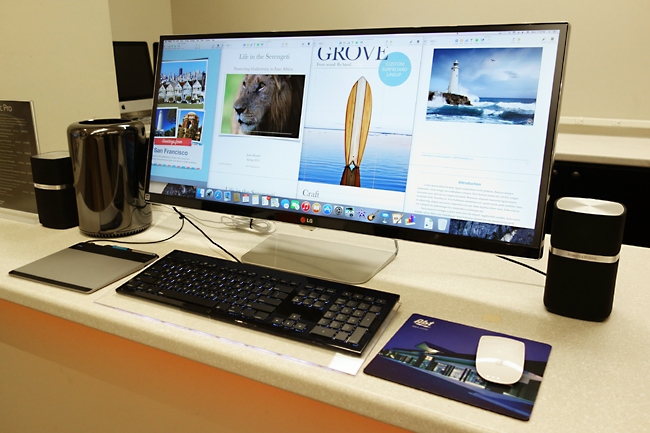 ASUS is one of the most popular computer and computer component manufacturers in the world, and for good reason. They produce just about every type of component or accessory available, in addition to phones, tablets, monitors, and complete desktops and laptops. While many of their products are intended for the mainstream audience, ASUS is also strongly devoted to the PC gaming community. The ASUS Republic of Gamers—or ROG—sub-brand features a product line stacked with ultra-high-end tech designed specifically for the most demanding gamers.

We spent some time with ASUS at CES 2017 to learn about their newest ROG gaming laptop offerings, which pack desktop power and features into (mostly) portable PCs.

First up, we have the ASUS ROG Strix GL553 and GL753, a pair of entry-level gaming rigs. Inside either laptop, you’ll find the latest Intel Core i7 Kaby Lake processors, for overall speedy performance. The GL553 sports a 15-inch screen, while the GL753 has a 17-inch display, and the laptops will be available with either an Nvidia GTX 1050 or GTX 1050 ti GPU. While not the fastest mobile GPUs around, these new cards will still perform respectably even with today’s AAA games. ASUS emphasizes that while great for gaming, the GL553 and GL753 also make perfect all-around productivity machines.

If you’re looking for something a little more potent, consider the ASUS ROG G752 OC.  With factory-overclocked CPU, GPU and RAM, it packs some serious power. Inside you’ll find an Intel Kaby Lake i7 processor, GTX 1070 GPU, room for 64GB of RAM and a pair of NVMe SSDs that can be arranged in a RAID configuration. That feature-set means the ROG G752 OC is VR-ready out of the box, so you can plug in an HTC VIVE and game away. Though the display is no slouch: the 17-inch 120Hz IPS G-SYNC panel rivals some of the best desktop displays available. Check it out:

The G752 OC is a pretty high-end machine. But say you still want more power. Well, hope you’ve got a strong back. At the very top of the pile stands the ASUS ROG GX800, a gaming laptop that somehow packs in features that would make most multi-thousand dollar professional desktops cower in fear. The GX800 is factory-overclocked, features an Intel Kaby Lake i7 CPU, and a pair of Nvidia GTX 1080 GPUs in SLI. It sports an RGB-backlit mechanical keyboard, and the 18.4-inch screen is available in 4K resolution. Oh, and it has an optional water-cooling dock, for when you need to really crank up the settings. Of course, all of that power comes at a price, literally and figuratively. It will be available at “a very very high price,” and weighs over ten pounds. So it’s not likely you’ll be throwing it in a messenger bag for a stroll around the city. Still, if money is no object and the only goal is peak performance in a portable-ish package, there’s no better machine on the planet.

We spent a lot of time exploring ASUS CES showroom, so stay tuned for more coverage on the rest of their offerings!