If 2015 was the year that consumer “drones” became a household topic, 2016 looks to be the year that they’ll reach ubiquity. From integrated optics that put pro-level video quality on an affordable aerial platform to ultra-efficient designs that triple the typical fly-time, everything about drones is becoming better and easier to use.

We picked the brain of industry leader DJI Global, whose Quadcopters have become nearly synonymous with the term “drone.” After bringing easy flight control and built-in cameras to the masses, DJI continues to tweak its offerings as its most advanced tech trickles down to the entry-level models. Their newest model is the DJI Phantom 3 4K, which takes the Ultra High Definition video capability of its flagship drones, the DJI Inspire 1 and the Phantom 3 Professional, and puts it in a consumer model. By cutting out some of the pro features—like an increased operating range and the Lightbridge transmission system—DJI has created a drone for casual users who still demand the ultimate in video quality. It should be hitting the shelves soon, costing just under a thousand bucks.

We also stopped by the Parrot booth to find out about their autonomous aerial vehicle, the Disco. Parrot has gone in a different direction with the Disco, opting for a “flying wing” body style instead of the typical quadcopter configuration. This design gives Parrot a few huge advantages. Firstly, its insanely easy to launch—as simple as throwing it into the air—and easy to fly, with the wide body more stable than a quadcopter while aloft. And high-tech control systems take advantage of a suite of integrated sensors to make controlling the Disco a breeze. The winged design is also much more energy-efficient than a quadcopter, giving the Disco up to 45 minutes of flight time. Oh, and it also cruises at nearly 50 mph. The catch? Because it can’t hover, you won’t be able to easily achieve the cinematic slow-panning scenic shots that have made drone videos so popular. No price or definitive release date have been announced, but Parrot is expecting the Disco to hit the skies this calendar year. 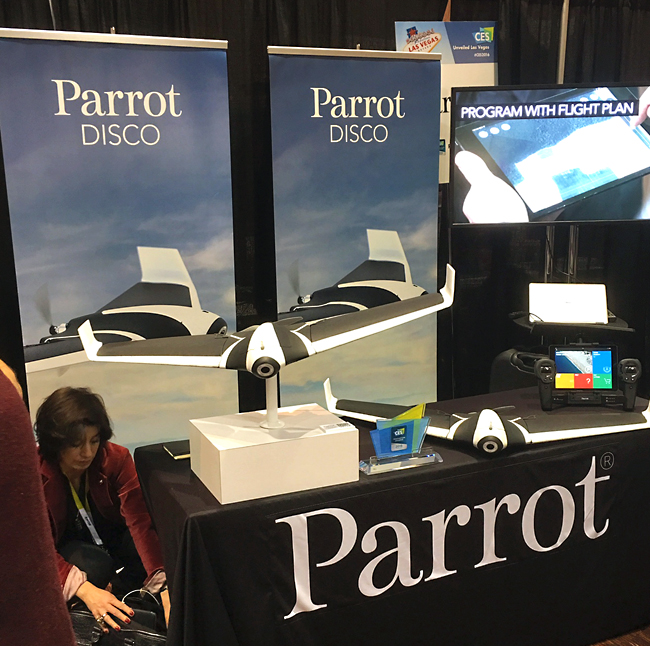 The Parrot Disco eschews the quadcopter form factor in favor of a flying-wing design.

Advancements in A.I. and autopilot systems have made it easier than ever to operate drones, which has made the barrier to entry lower than ever before. Some see this as a good thing, bringing scores of new participants to the hobby, while others see it as a bad thing—the easier drones are to get in the air, the higher the odds get that an accident occurs. It’s been a hot-button topic, with stories like the falling drone that nearly crushed a World Cup skier and the announcement of the Federal Unmanned Aircraft Systems registration program. What does the future hold for the drone industry? No one can say for sure, but from we’ve seen here at CES 2016, the sky’s the limit. We’d love to hear your thoughts on the world of remote flying vehicles!