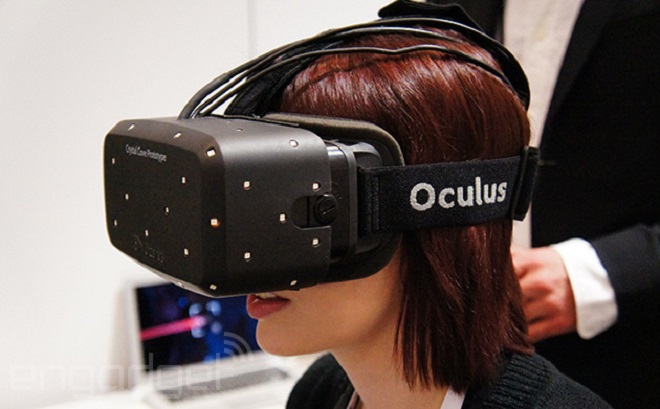 It sounds like something from a Sci-Fi movie, but the Oculus Rift is anything but fictional; it’s a fully immersive virtual reality experience. The Oculus Rift  has been in development since it’s inception years ago and during CES 2014 the latest prototype Oculus Rift Crystal Cove prototype has made a wealth of updates, making the new experience incredible. The new “Crystal Cove” prototype is now slightly smaller and runs at 1080p resolution. The biggest improvement made, however, is the unit’s enhanced positional tracking and motion blur technologies. If you take a look at the image above, you will notice white dots around the front headset. These white dots coordinate with the pre-positioned camera that will gauge where you look.  Depending on what you are doing in the game, if you need to look up, down, left or right, it will track that information and correlate it with your character’s movement.

On top of added technology, the headset shows viewers beautiful imagery, all in 1080p OLED that is both sharp and bright.  Oculus Rift has been in the hands of developers form every industry, from automotive, to even NASA.  As the technology continues to improve, look to see the unit becoming more affordable, more intuitive, and more mainstream.  Manufacturers are hoping this will hit the general public this year, but as with everything showcased at CES, only time will tell.

Connect with Nick E on Google+