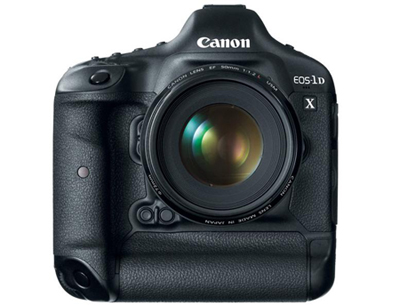 The new Canon DSLR EOS 1-D brings a lot to the table with a full-frame 18-megapixel sensor with the biggest pixels ever in a Canon DSLR. ISO 204,800. 12fps RAW shooting. 61-point autofocus. Three DIGIC image processors. One gigabit ethernet port.  That’s just the start for this new DSLR camera from Canon listed MSRP at around $6,800. The 1D X replaces both of the cameras currently at the top of the Canon pile, the 1D Mark IV and 1Ds Mark III.

The DSLR also stays true to recording HD video like Canon’s previous models. It’s the usual 1080p at 24fps or 30fps or 720p at 60fps, but it now has continuous video recording of up to 29 minutes and 59 seconds—the camera automatically generates a new video file when it hits 4GB. Look for this new DSLR to hit the market early 2012.