After much speculation and anticipation, Canon took the wraps off two new eagerly-awaited DSLRs this week. The Canon EOS 6D Mark II and Rebel SL2 bring significant updates to two of the most popular Canon DSLRs, and are likely to be among the hottest new cameras this year.

The 6D Mark II updates its predecessor on nearly every front, presenting a refined full-frame option aimed squarely at intermediate and professional users. A bump in resolution, to 26.2 megapixels, will provide more detail in photos, while an updated autofocus system—including the highly-regarded Dual Pixel phase-detect AF from the EOS 80D—will help users utilize that resolution to capture sharply-focused photos.

One of the most notable additions to the Canon 6D Mark II is the inclusion of a vari-angle touchscreen LCD. With a pivoting hinge on its left side, the LCD screen can be popped out and positioned  so the user can frame shots from below, above, or even completely in front of the camera. This feature is useful for composing unique photos and grabbing the perfect group selfie, but it’s also invaluable for videographers who often rely on an auxiliary monitor specifically for the flexibility it gives. The touchscreen offers an optional way to navigate menu screens, as well as making it super easy to select focus points during live view photography.

Accompanying the 6D Mark II was the reveal of the Canon Rebel SL2, the successor to the diminutive Rebel SL1. At the time of its release, the SL1 was the smallest APS-C DSLR available. When paired with certain lenses—namely the 24mm and 40mm pancake lenses—the SL1 was nearly pocketable, and an ideal choice for shooters who wanted that elusive combination of portability and maximum image quality. The Rebel SL2 is poised to carry that torch, maintaining the miniature stature of its sibling while adding in a bunch of features that will make the shooting experience more enjoyable, while bringing some improvements to overall image quality. 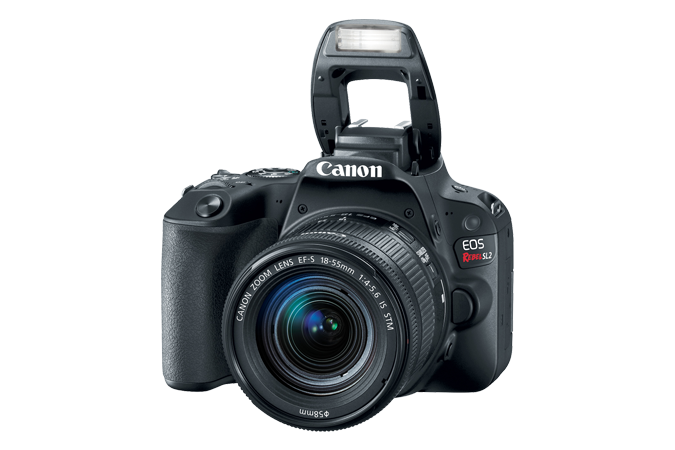 Like the 6DII, the SL2 gets a resolution increase, sporting a 24.2 megapixel APS-C sensor, most likely the same one found in the 80D. Surprisingly, the Rebel SL2 gets a pretty potent autofocus system as well, with a phase-detect AF featuring what Canon is calling “the world’s fastest AF speed” at a claimed 0.03 seconds. The SL2 also gets upgraded with a vari-angle LCD screen and Canon’s new Feature Assistant, which uses on-screen information to teach new users how their photo will be affected by changing particular camera settings.

Both the Canon EOS 6D Mark II and Rebel SL2 will be hitting shelves late July, but are both available for pre-order right now at the links in this post.