Bose has an extensive product lineup that encompasses home and portable audio, but some of their most beloved products are their headphones. The QuietComfort headphone series has achieved something of a cult status, and with good reason—the active noise cancelling technology in those headphones is widely considered the best in the industry. You’ll see the ubiquitous QC35 perched on the heads of frequent flyers, daily commuters, coffee-shop-dwelling remote workers and anyone who needs to tune out the sounds of the outside world to stay focused. Building on the success of the QuietComfort headphones, Bose has turned its attention to another area of our lives where many of us seek relief from the noise of the world: while we sleep. The Bose Sleepbuds are a compact pair of completely wireless earbuds whose sole intent is to help you get a better night’s sleep.

The first thing to know about the Bose Sleepbuds is that while they may look like a typical in-ear headphone, they are purpose built as a sleep aide. They won’t play your music, and you can’t take phone calls through them. Instead, their sold purpose is to help mask outside noises that can make it hard to sleep. The Bose Sleepbuds do this with a combination of two features. First are the extra soft, noise-isolating StayHear+ Sleep tips, which conform to your ear canal to mute environmental noises. Then, the Sleepbuds continuously play soothing sounds that further mask outside noises and help promote relaxation. Users can pick from one of 10 pre-loaded “soundtracks,” which can be set to play all night long, or turn off after a set amount of time. More sounds will be available in the future.

Bose Sleepbuds users can select from one of ten pre-loaded soundtracks, with names like Tranquility, Campfire, and Warm Static.

One of the most surprising things about the Bose Sleepbuds is just how tiny they are—less than half the size of a typical wireless earbud like the Bose SoundSport Free. By focusing only on the singular task of noise masking, Bose could pare down these earbuds to only the essential technological bits, reducing their footprint to a size no bigger than a typical foam earplug. Coupled with the soft StayHear+ Sleep tips, the Sleepbuds all but disappear into your ear canal, ensuring their presence doesn’t keep you up at night. A single charge is good for up to 16 hours of use, and the included carrying case doubles as a charging dock which provides an additional full charge to the buds. 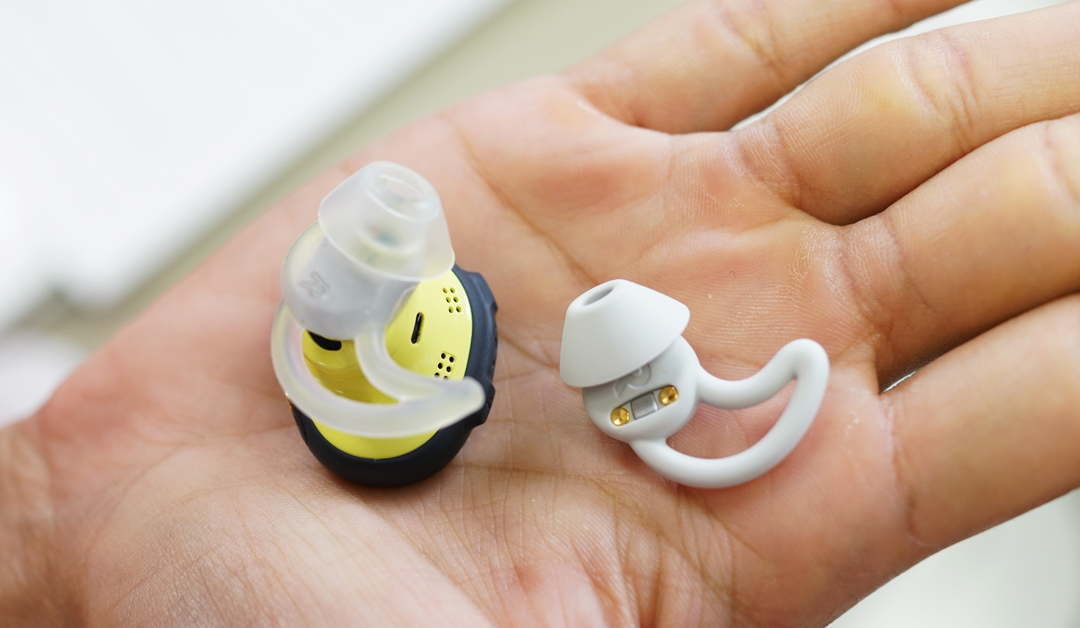 The Bose Sleepbuds are downright diminutive compared to other wireless earbuds, like the Bose SoundSport Free.

An important part of a satisfying night of sleep is how it ends. Being jolted out of deep sleep by a blaring alarm is not just an annoying way to start the day, there’s evidence that it can be bad for your health. The Bose Sleepbuds feature an alarm that will wake you with a gentle chiming that only you can hear. No more worrying about your bedside alarm waking your sleeping partner. If you find that you have trouble sleeping because of environmental noises, and a white noise machine isn’t cutting it, the Bose Sleepbuds might be the solution you need to sleep soundly. You can order them today at Abt.com.