The year was 1967.  Fresh out of high school Terry Forrest was looking for a temporary summer job to earn some money.  Hearing that a company in his neighborhood was looking for employees, he applied and got hired to be their driver.  One day after his deliveries, he was approached by none other than Bob Abt, telling him he should get himself a white t-shirt and a tie so he could hit the sales floor the next day.

Fast forward to 2010. Terry has spent the last 43 years working for the Abt family and is currently the longest working employee outside of Bob Abt. Through these years Terry has amassed a large group of friends and colleagues, some of whom even began as his customers. When I first approached him about writing a story about him, he looked at me through his veteran blue eyes with some uncertainty.

“Is this gonna be on that Facebook?” he asked, while shuffling his papers.

“Not quite” I said, moving forward.

With over four decades under his belt, Terry exemplifies what it is to be a dedicated worker.  In this day in age to have been working for so long, for the same company, is an achievement in itself.  That kind of commitment also comes with an abundance of work. But like a switch, he looked back at me, sat down, gave me a smile and asked, “What would you like to know?”

Terry has seen the store change locations four times. He has worked through the rise and fall of technologies like Beta-Max, 8-Track players and Laser Discs. Over the many years, one thing has stayed the same and that’s simply, to always “do the right thing.”

He was thankful to be able to provide for his family members throughout the years by keeping to that motto. “When you are with a first time customer, really listen to what they want. Give them a great price and they will return”.  He has sold to a wide range of customers, from first time home owners to retirees. His excellent customer service and sales experience has even led some customers to have stayed with him since they met him, some going back 35 years.

Just then, his phone began to ring. Terry rolled his chair back in front of his computer, readied his pad and pen and picked up the phone. “All right.  Let me know if you need anything else,” he said to me before he began speaking with his customer. I didn’t know how long the person on the other end had been working with Terry, but I knew one thing: they were in good hands. 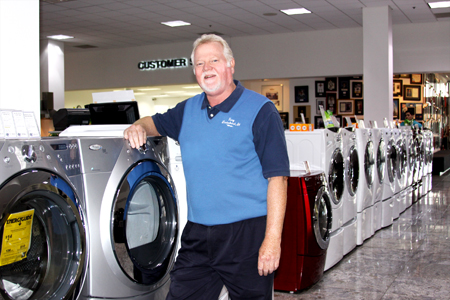