Announced at this year’s CES, the ASUS ZenFone 3 Zoom is now available to pre-order. We got an early look at it while at CES, learning about its high-tech camera and some other features. It’s now officially been announced for pre-order, with some surprises like a larger-than-average battery and a lower-than-expected price tag. Let’s take a look at some of the features of the new ZenFone 3 Zoom.

As we learned at its announcement, the chief new feature of the ZenFone 3 Zoom is the redesigned camera. A wealth of technologies—both hardware and software—have been implemented into one powerhouse imaging unit that promises some of the best photographic capabilities of any smartphone available. It all starts with the camera, itself. Or, more accurately, the cameras. Packed into the rear of the ZenFone 3 Zoom are a pair of 12MP imaging sensors, each with its own lens: a wide-angle, fast-aperture lens for scenic vistas and low-light shots; and a 2.3x optical zoom lens for getting close and grabbing picture-perfect portraits. The ZenFone 3 Zoom seamlessly switches between cameras depending on your settings, or they can be used together to create the all new depth-of-field effect, which gives your portraits that blurry background that’s usually obtainable only with an interchangeable-lens camera like a DSLR. 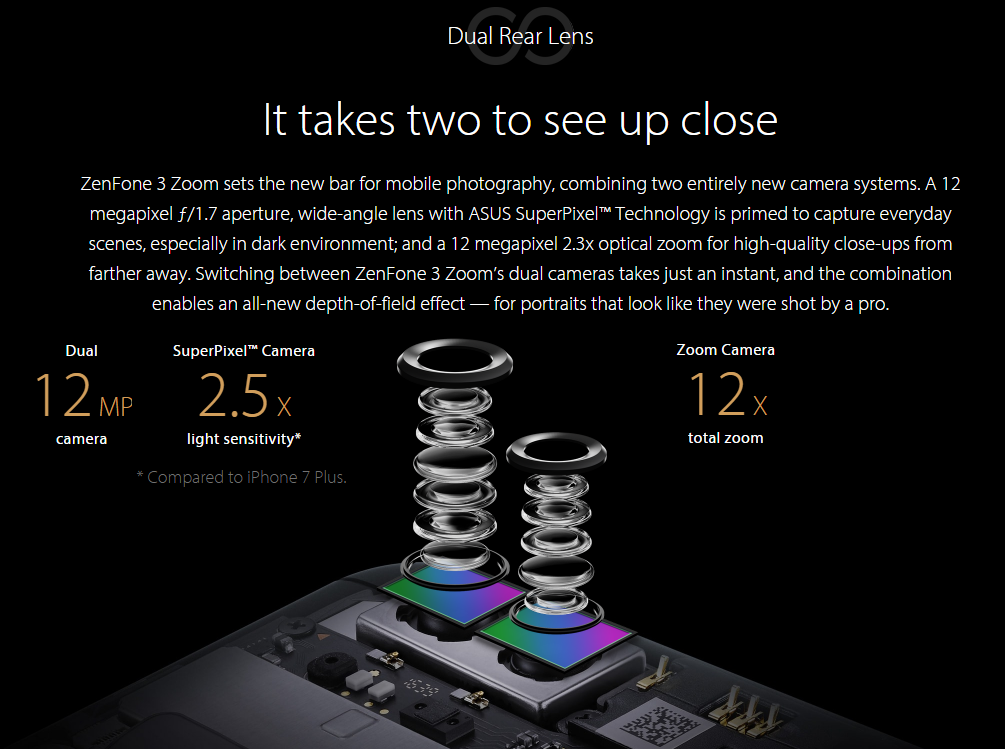 Of course, lenses are only half of the equation when it comes to creating a killer camera. Behind those lenses are the latest, most advanced Sony imaging sensors. Built with extra-large pixels, the Sony sensors are made to soak up light. Combined with the fast-aperture wide-angle lens with optical image stabilization, the ZenFone 3 Zoom is well-equipped for low-light photography.

Complementing the ASUS Zefone 3 Zoom‘s lens and sensor combo is an all-new Dual Pixel phase detection auto focus system, similar to those used in high-end DSLR and mirrorless cameras. This system leverages every single pixel on the imaging sensor (all 12 million of them) and uses them to focus. The result is an astoundingly quick focusing system that snaps your photos into focus in as little as 0.03 seconds. 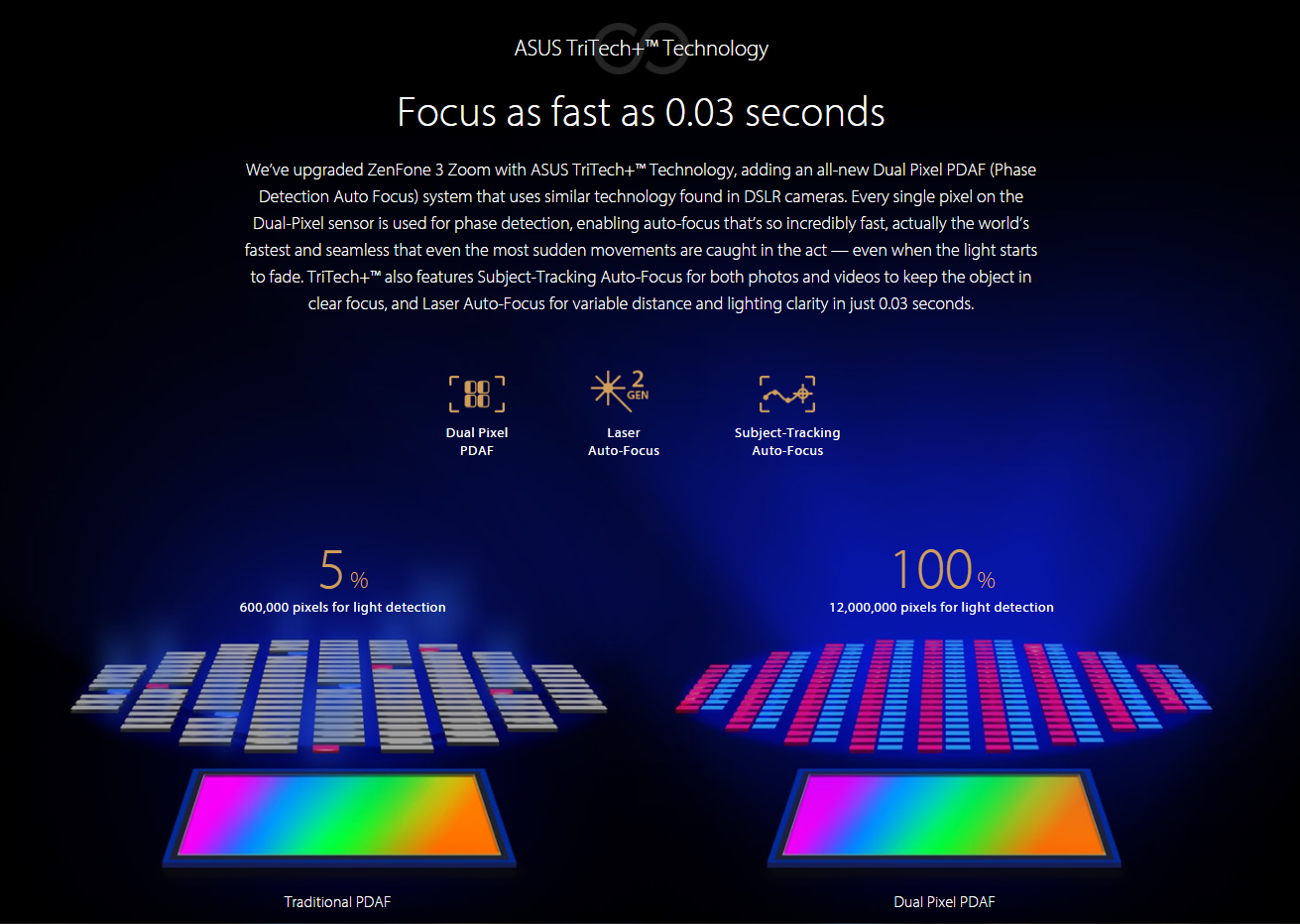 To control all of these new photo features, the ZenFone 3 Zoom also includes a fully-featured manual mode, giving photographers advanced imaging controls not normally found in a smartphone. Control photo parameters like shutter speed, white balance and ISO; dial in exposure compensation; and even capture RAW image files. In short, the ZenFone 3 Zoom was built for photographers.

And since even the most serious photographers can’t resist the occasional selfie, ASUS made sure not to skimp on the front-facing camera. A fast-aperture lens, 13MP sensor, and screen flash feature ensure you’ll be able to put your best face forward in any setting.

That’s a long list of photographic features, which is pretty amazing considering that the camera is usually not the primary purpose of owning a smartphone. To that end, ASUS did also include a wealth of features that will make the ZenFone 3 Zoom a great all-around smartphone. A 5.5-inch Full HD AMOLED display— covered by Gorilla Glass 5—strikes a good balance between size, resolution, and power requirements. The Snapdragon S625 processor keeps up with the industry’s fastest CPUs, with the added benefit of extra power savings. A USB-C port and fast-charging capabilities will be a boon for power-hungry users, if they can manage to eat through the ZenFone 3 Zoom’s gargantuan 5000mAh battery. 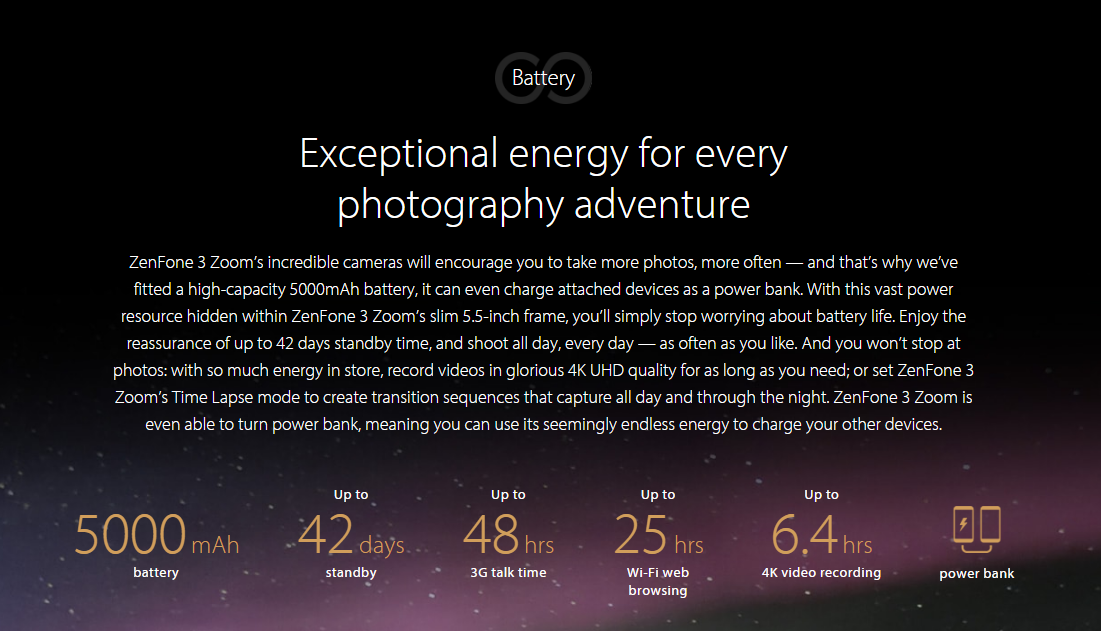 With an impressive feature set that balances performance with power-savings, the ASUS Zenfone 3 Zoom looks to tick every box on any savvy smartphone shopper’s list. Add in one of the most comprehensive camera hardware and software suites around, and this phone looks to be a winner. We’re thinking that the huge battery and advanced imaging capabilities make it a good pick for summer travel season. And priced at a very competitive $329—unlocked and with no contract—the ASUS ZenFone 3 Zoom is bound to be one of the year’s hottest phones.

Earth Week at Abt

Saying Goodbye to Our Summer Interns

The Benefits Of A Wide Angle Lens

For beginner photographers interested in advancing their skills, upgrading to a wide angle lens is a great way to capture outstanding photographs.

Sony's latest HD camcorders are available for pre-order on Abt.com. Learn more about the Sony camcorders and available lenses we offer on The Bolt.