With the news yesterday about the iPhone 5, you may have forgotten that Apple also introduced new entire to their line of iPod Touch and iPod Nano.

The new iPod touch has been redesigned with a 4-inch Retina display in an ultra-thin and light anodized aluminum body. At 6 mm thin and weighing just 88 grams, it’s the slimmest and lightest iPod Touch yet. With Apple’s dual-core A5 chip inside, iPod touch delivers up to twice the processing power and up to seven times faster graphics than the fourth generation iPod touch.  Its also has an incredible amount of batter life in it giving you up to 40 hours of music and up to eight hours of video playback.

The new iPod touch includes a 5 megapixel iSight camera with autofocus, support for 1080p video recording with video image stabilization, face detection and an LED flash, and the new panorama feature that lets you capture panoramic photos using the built in program that assists in aligning your images evenly.

With the new iOS6, Siri arrives on the new iPod touch with support for more languages, easy access to sports scores, restaurant recommendations and movie listings. 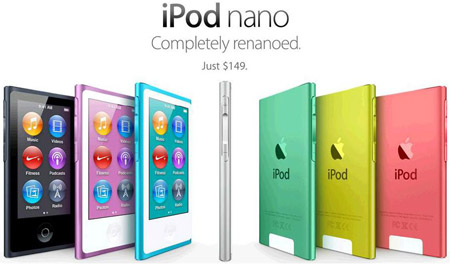 The reinvented iPod nano is the thinnest iPod ever, at just 5 mm, and features the largest display ever built into an iPod nano, allowing you to enjoy more of your music, photos and widescreen videos. The new iPod nano features a 2.5-inch Multi-Touch display to make navigating your music even easier; a home button to quickly get back to your home screen; and convenient buttons to easily control volume and quickly play, pause or change songs without looking.  The new iPod nano gives music lovers built-in Bluetooth for wireless listening with Bluetooth-enabled headphones, speakers and cars.

At 30 hours, the new iPod nano offers exceptional listening times as well as an FM radio. With built-in fitness features including a pedometer which is perfect for working out.

Pre-ordering for both start September 14! Check back with Abt Electronics for full Apple details and the arrival of these great new units.

Nintendo Wii U to Launch in November
iPhone 5: The Rundown
iPodiTouch
0 Comments
By Pete R