Apple has announced some new updates for a few of its products, including the iMac, Mac Mini, and Mac Pro desktop lines, as well as upgrades for the AirPort Extreme 802.11n Wi-Fi Base Station and Time Capsule. The good news is that some of the new products are available at lower prices than their predecessors. 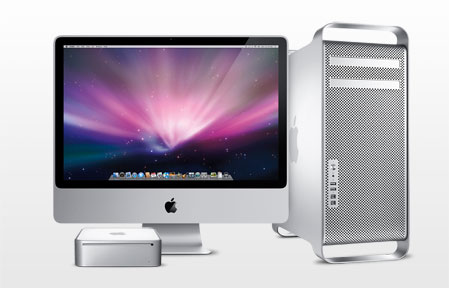 The new Mac Pro has dropped in price from $2799 to $2499, and features the Intel Xeon “Nehalem” quad-core chipset and 1066 MHz DDR3 RAM. It includes a 256MB Nvidia GeForce GTS 120 graphics chip, but an ATI Radeon HD 4870 is also available. The AirPort Extreme 802.11n Wi-Fi Base Station and Time Capsule now feature simultaneous 2.4 GHz and 5 GHz dual-band networking for improved range and performance.

Check our Apple web page or contact one of our knowledgeable Apple sales reps for more information.    —by Graham W.