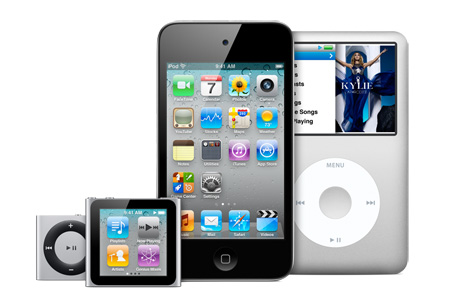 Yesterday Apple announced their new lineup of iPods and their revamped Apple TV.

The 4th generation Shuffle went old school and brought back the scroll wheel, clip and power switch from the 2nd generation design.  The $49 unit comes in five colors (silver, green, pink, orange and blue), one capacity (2GB), and all the features of the 3rd generation’s VoiceOver model.

The new 6th generation iPod nano had a total overhaul and now features a 1” touch screen.  It is Apple’s smallest nano at a 1.5” square and only 0.35” thick.  It comes in seven colors (silver, gray, blue, orange, pink, green and red), two capacities (8GB – $149 and 16GB – $179) and features a clip on the back (similar to the iPod Shuffle).  However, the video camera from last year’s Nano has been removed.

The 4th generation Touch comes in three sizes: 8GB for $229, 32GB for $299 and 64GB for $399.  The biggest update to this model is the addition of two video cameras (like the iPhone 4), which allows for video conferencing.  Other changes include a lighter and thinner case, split volume rocker and smaller design changes.  This is Apple’s closest iPod to the iPhone, without it being an actual phone.

The new $99 Apple TV is about 1/4th the size of the old Apple TV, with a built in power supply.  It has one HDMI connector and Ethernet, and Wi-Fi.  A big change is making everything rental only – that means no purchases on Apple TV.  This eliminates any issues people had with storage.  Another big surprise are 99 cent TV show rentals.  As of today, only ABC and Fox have signed on.

Apple also launched iTunes 10 and Ping, a music social network.  With Ping, you can follow friends and artists to see what they’re listing to and downloading.

Abt will be carrying the new iPod line up and Apple TV.  Check out our site this afternoon for more information or stop by the store next week to see them in action.