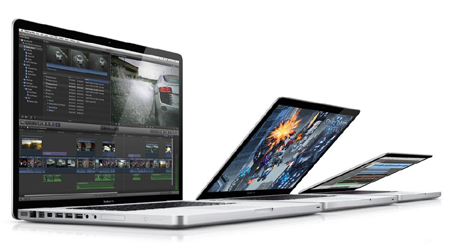 Apple unveiled updates to its entire MacBook Pro lineup, which have faster processors, improved performance, and larger hard drives without changing prices. The upgrades on the faster MacBook models will be available in time for the 2011 Christmas shopping season.

The 13-inch MacBook Pro comes in two configurations, an entry-level configuration that sells for $1,199.00 with an Intel Core i5 processor, and a faster $1,499.00 model equipped with an Intel Core i7 processor. Both have received a slight bump in speed, as well as larger hard drives. The entry-level 13-inch gets a new 2.4-GHz processor (up from 2.3GHz), and increases its storage space from 320GB to 500GB. The faster MacBook Pro 13-inch gets a newer iteration of the Core i7, running at 2.8GHz (up from 2.7GHz) and getting a larger 750GB hard drive, increased from 500GB.

The Evolution of Recording Music
Microsoft's OmniTouch: The Future Arrives in the Palm of Your Hand
AppleHoliday ShoppingMacBook
0 Comments
By Pete R