Abt at the Movies- The Artist 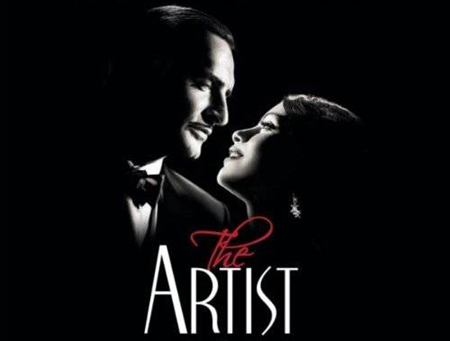 If a picture is worth a thousand words, what is a hundred minute long silent film worth?  When The Artist came out to theaters, people were perplexed at the idea of a silent film this day in age.  A handful of people even were even leaving their seats, demanding a refund for the price of their ticket.  No matter. It may not have the same pull of some big summer blockbusters, but The Artist stands above those popcorn-munching movies and delivers an unforgettable experience.

It’s 1927.  Hollywood has been churning out edge-of-your seat adventures with silent film star George Valentin (Jean Dujardin).  With a Clark Gable-esque mustache and the feet of Fred Astaire, women love him and men want to be him.  He can send movie goers rushing to the theaters with just a lift of his eyebrow and a wink of the eye.  Big hit after big hit, Valentin is seemingly unstoppable; until Hollywood discovers sound and begins producing, “talkies”.  Like the incredible rush in today’s age to see new flicks in 3D, people were rushing to the theaters to gobble up all the talkies Hollywood had to offer.  With the change in format, also comes a change in stars.  By sheer dumb luck, a young woman named Peppy Miller (Berenice Bejo) bumps into Valetin during a red carpet photo-op and becomes the luckiest girl in the world as she is caught planting a kiss on Valentin’s cheek.

Naturally the general public becomes fascinated with this encounter.  Variety magazine runs a picure of the kiss along with the title, “Who’s That Girl?”  Moviegoers would eventually find out as Miller tries her hand at starring in movies, and over time, sees her stardom and her name on the credits, continue to rise.  She becomes the official go-to actress for all of Hollywood’s talkie needs.  Meanwhile, Valentin, refusing to give up on silent film, finances his own movie and realizes, people’s interests change just as quickly as he can dance.

The movie is not a film-school experiment.  Director Michel Hazanavicius sweats over every detail to replicate the look and feel of a silent movie.  After just a few minutes into The Artist, you completely forget about the lack of dialogue and are are sent back in time to the roaring 20’s.  Keeping the movie silent also takes audiences to a different level of experiencing a movie.  Every detail, every orchestra sound and every little idiosyncrasy of the actors speak louder than any words can.   Dujardin and Bejo have some of the most amazing chemistry seen in years.  They are fantastic alone, but mesmerizing when they share scenes together.  The Artist oozes set design, smart direction, beautiful period piece costumes, and an incredible panache by the lead actors.  It’s been a while since a movie has captured my imagination from top to bottom by being thoroughly satisfying and immensely creative.  Sometimes a picture is worth a thousand words, but The Artist left me speechless.

Rated PG-13 for a disturbing image and a crude gesture.  Running time: 100 minutes.

Roku is your choice for excellent programming content.   Boasting over 350+ channels, including movies & TV shows, music, sports & more, you are always going to find something to watch.  Choose from numerous, FREE movie service from Crackle with hundreds of Hollywood movies & shows on demand.  The built in wireless allows users to connect the Roku directly to their TV and stream video in high definition.