Abt at the Movies- Jeff, Who Lives at Home 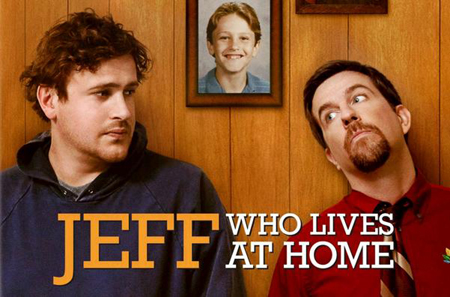 Do things happen for a reason?  Is the world filled with sequential moments that eventually lead each one of us to our true destiny?  Or is it a complete cluster of randomness and we’re lucky we make it through each day without being dumb enough to get run over by a car?  That’s what the movie written and directed by co-directors Jay and Mark Duplass try to convey in Jeff, Who Lives at Home.

Jeff, played by Jason Segel, is what some would consider an amateur philosopher.  The opening shot of the movie is Jeff deeply theorizing about his favorite movie Signs-while sitting on the toilet.  Jeff is unemployed and a burden to his mother Sharon played by Susan Sarandon.  Sharon calls her son and asks him to fix a broken panel on their wooden door.  After a brief argument, Jeff concedes and sets out to buy some wood glue.  From there he finds himself in a few predicaments that ultimately leads him to be discovered by his brother Pat who spots him outside a Hooters restaurant and they reluctantly become an awkward brotherly duo for most of the movie’s main dramedic storyline.

Jeff’s brother Pat (Ed Helms) has a few problems of his own.  He and his wife Linda (Judy Greer) aren’t exactly living in wedded bliss and that’s in part to Pat’s impulsive financial decisions, such as, choosing to purchase a Porsche Boxer instead of making a down payment on a home.  After running into each other outside the restaurant, Pat and Jeff eventually discover Linda eating lunch with another man.  This thrusts Pat and Jeff into a cat and mouse chase trying to discover what Linda is truly up to.  Jeff makes decisions based solely on what he perceives is “fate” while Pat progressively gets frustrated with his crumbling marriage and his brother’s decisions.

The Duplass Brothers hit the “big-time” a few years ago after submitting a short film as a joke to the judges at the Sundance Film Festival, which ultimately led them to become Hollywood writers and directors.  They have been churning out heartfelt indie-themed movies since their discovery.  Some may even recognize Mark Duplass’ name as he plays the character “Pete” in the TV show, “The League“.

The Duplass Brothers have really honed their indie skills and have created a world that isn’t much different than our very own.  The entire movie is filmed, if you are familiar with their previous work, with their deadpan Duplass Brothers’ style.  This consists of fast camera zooms used for comedic effect, as well as sibling conflict and a smattering of tenderness.  With their ability to tell a story getting even better, along with the help of some amazing acting by the entire lead cast, this is the Duplass Brothers’ finest film to date.

Who hasn’t asked themselves (while either sitting in an office cubicle, or waiting at the bus stop, staring at birds) the ultimate question, “what is my destiny?”  Taking a simple, but impossible-to-answer, question and turning it into an entertaining film is something the Duplass Brothers accomplished and then some.  In a summer that’s filled with blockbusters, explosions, aliens and more, don’t forget the little guys. Jeff, Who Lives at Home didn’t have a big budget, or even huge Hollywood names, but it has heart and the ultimate desire to discover what life is all about.

Rated R for language including sexual references and some drug use.  Running time: 83 minutes.

HOME THEATER SPECIAL OF THE WEEK:

SONOS PLAY:3 is the versatile, all-in-one player with big sound in a compact size. With three integrated speakers and three digital amps, PLAY:3 streams all the music on earth wirelessly in any room for wall-to-wall sound. Go vertical or horizontal. Control with free apps for your iPhone or Android phone.  Pair it up with the Sonos Bridge Wireless Extender and never be without your favorite music.