The Summer Olympics in London is fast approaching.  As of this blog post, there are 18 days left when the world sends their best athletes to compete in a host of athletic endeavors.  As with tradition, the running of the torch is making its way closer and closer to its destination, and just the other day Abt Electronics’ very own Mike Abt was one of the lucky few who got to run with the torch. 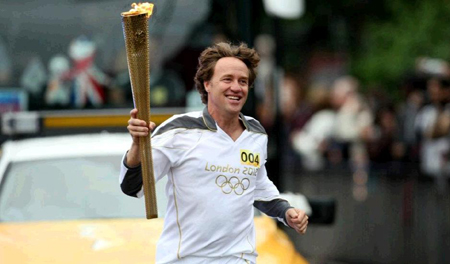 Mike Abt was the third torchbearer of the day and he ran 300 meters, smiling all the way. “The experience brings everyone together for the common good,” said Mike Abt. “It is powerful to be on planet Earth with 7 billion people and to be the one human carrying the flame. Everyone wanted a picture with the torch and me.”

The Olympic torch has been a tradition in the Olympic games since the beginning of the games themselves. When it’s time to start a new torch relay, a very precise ritual for the lighting of the flame is lit from the sun’s rays at the Temple of Hera in Olympia, in a traditional ceremony among the ruins of the home of the ancient Games. After a short relay around Greece, the Flame is handed over to the new Host City at another ceremony in the Panathenaiko stadium in Athens.

Abt is honored to be a part of the Olympic Games thanks to our partnership with Samsung, an official sponsor of the London Olympic Games. For a look at more pictures, check out Abt’s Facebook Photo Album. Great job, Mike!

The Battle of the (Home Theater) Big Screens: TV vs. Projector
Want a Free TV with that new TV?
london olympicssamsung
0 Comments
By Pete R