Approximately two months ago, a customer and his daughter approached me with a request. His other daughter was serving in the Peace Corps in Ukraine and was planning to come to Chicago on June 22nd.  Coincidently, his wife’s birthday was the same week.  He asked if we could deliver his daughter in a refrigerator box as a surprise for his wife.  I told him that we would. His daughter and son picked up their sister at the airport and brought her to Abt. We then took her in a truck to the house, and snuck her into a refrigerator box.  We went to the door and announced that we had a delivery, to which her mom stated that she hadn’t ordered anything.  Her father stated that he bought her mom something for her birthday as a surprise.  He also  said that she should check out the unit before we brought it in, as he wanted to make sure she liked it before we went through the trouble of bringing it in.  They walked up to the truck, we opened the box and the girl exclaimed “Happy Birthday Mom!”  ran out and hugged her mom. 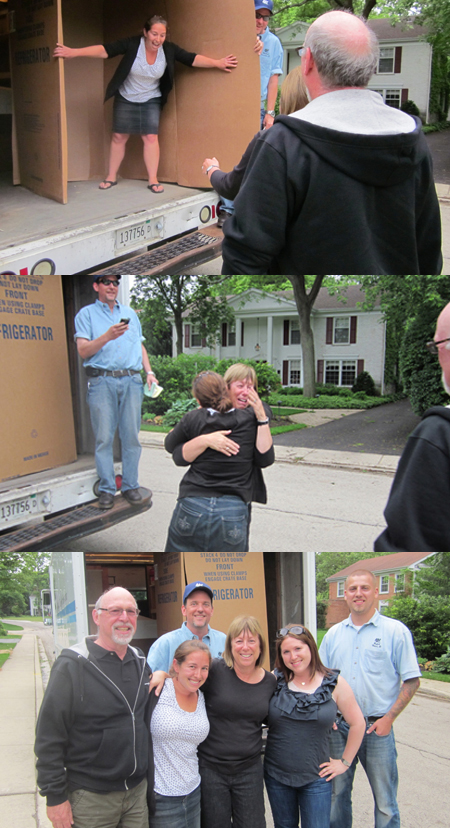 It was really emotional, in a great way.  A neighbor was hiding in their bushes catching it all on a camcorder and this video can be seen in the YouTube link, “Ellen’s Surprise“.  While we were all in the street a neighbor drove up and asked what was going on and the mom said “Abt just delivered my daughter from Ukraine to Deerfield”

*For The Scavenger Hunt, today’s secret letter is, “M”.  Comment on the blog below and one lucky winner will be chosen to win $100 Abt gift Card.  Winner will be announced on Monday, June 27th at 9:00 am CST.*