A Remembrance of Jim Simpson

Abt salesman Jim Simpson recently passed away at the age of 64 and was laid to rest over the weekend. Everyone at Abt sends their heartfelt condolences to Jim’s family and his many friends. Here is a remembrance from one of those friends at Abt, Rafael Pena:

My friend and co-worker, Jim Simpson, has passed. I do miss him. He was a quiet guy but we always found something to laugh about. We just had lunch together two days before his passing. Jimmy was a character. You could never win when it came to a conversation that involved politics, religion, or history. He always would stand on what he believed in. 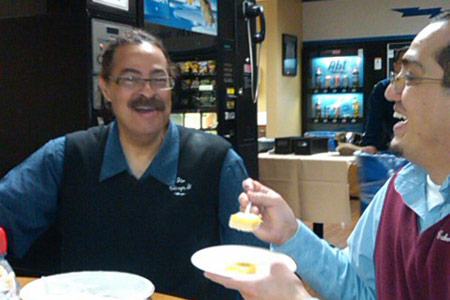 Jim with his friend Rafael 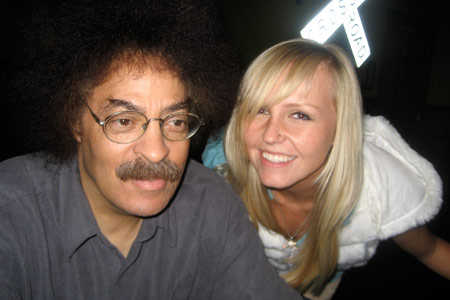 Jim with his friend Joanna

I remember one time we were at lunch, and he was eating an ice cream sandwich (he wasn’t supposed to eat junk food, according to Joanna, a fellow co-worker). Joanna came into the lunch room and saw Jim eating the ice cream, and I never saw him move so fast. He tried to hide the evidence but Joanna knew what was up. I laughed so hard I was crying. Joanna used to bring in an apple each day for Jimmy. She sometimes would bring in lunch for him. She tried to make sure he ate healthy.

I can’t hold back the laughter. I start to smile and the waiter catches on. Jimmy looks up and smiles at the waiter. I think the waiter learned his lesson. Be sure to ask the right question, especially if you are a waiter in a restaurant. From then on, every time we went to Friday’s for lunch, the same waiter would wave, smile, and say “Hi.”

Jimmy would always be there if you needed something. If I didn’t have any money for lunch, he would be the first to open up his wallet and give me money. Yes, “give” me money. If I tried to pay it back, he often would not accept it. I learned from him that we just need to be friends and get along with one another. Let’s just help each other out and it might make life in this small world easier for everyone.

That was my friend Jimmy Simpson.