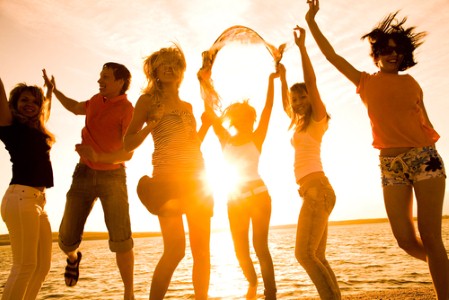 It’s not a party without music and we know that sometimes, the party doesn’t end where it began. In times like these you need the music to be as mobile as the party, and a solid set of on the go speakers makes enjoying your favorite tunes effortlessly convenient. The problem with portable speakers is that their size takes away from their sound quality. Their speakers simply aren’t large enough to produce the wide range of frequencies of the music. Ever listen to small portable speaker and not hear any bass? It wasn’t big enough to make the sound. Party logic says that inferior music leads to an inferior party, so take the superior route and enjoy these five quality on the go speakers that will sound great and keep the festivities festive – no matter where they may take you.

Created by the Bluetooth masterminds over at Jawbone, the Jambox is an airtight enclosure with a pair of acoustic drivers working in concert with a moving-wall passive bass radiator to deliver up to 10-hours of full sound, with shimmering highs and thumping lows, that you can actually feel. You can connect your mobile device (or computer) via Bluetooth, or through the 3.5mm input (the standard “iPod jack” you’ve used before) with an auxiliary cable. The Jambox also has a built in microphone so if someone needs directions to the new party location, the Jambox can be used as a speakerphone too. No wires mean no hassle, and no hassle means simple enjoyment of your favorite party jams.

Another Bluetooth speaker with an auxiliary input, the SoundLink brings the premium sound experience and design, that only Bose can deliver, to an on the go speaker. The rechargeable lithium-ion battery lasts up to eight (8) hours, and it has an integrated protective cover that doubles as a stand for easy and ideal party placement. You don’t have to be stuck to the device to control your music either. The SoundLink has a 30-foot wireless range so, prop it up on the tailgate and get your party pants on.

Ok – so, it costs more than some complete sound systems, but the sound and features of this B&O beauty make it worth the extra scratch. Starting with the high-quality aluminum and  non-slip rubber design, the Beolit can withstand the casual bumps and bruises that accompany any party. The sound is driven by an amplified 2.1 stereo system comprised of two two-inch tweeters, and a single four-inch subwoofer. The sound quality has been described as “outstanding” and “breathtaking” by Amazon reviewers. It has built in AirPlay, so anyone with an iPad, iPod, iPhone, or any computer with iTunes can stream music to the Beolit for up to four hours, or eight hours if plugged-in (power cord is hidden when not in use). For parties, anyone with an iPhone can pitch in and become the DJ of the moment.

Don’t mistake the smaller price tag for inferior performance. About a foot long and weighing in just a hair over two pounds, you can fit this wireless speaker just about anywhere – it even comes with its own travel pouch! Whooooope! Seriously, the Logitech speaker has a 50 foot wireless range and can blasts your tunes through dual, AAA-powered, two-inch drivers for up to 10 unplugged hours of audible bliss.  There is a plug-and-play wireless adapter for your laptop,  Bluetooth compatibility for iPad or other mobile device, and 3.5mm input for everything else.

The most affordable option on this list boasts a 4.7/5 rating on Abt.com. Only two and half inches tall, this Napoleonic loudspeaker is small enough to fit in your glove compartment or purse. The two speakers can be interlocked for easy travel with mono-sound, or be expanded for a stereo sound. The included 2-in-1 cable has a USB plug for charging and a 3.5mm input to connect to all your musical devices. While it won’t replace a full-sized boombox, the sound is strong and clear enough to add a little ambiance or attitude to any scene. One Abt.com reviewer claims that it lasts for four days with medium use.

Do you own any of these? Like them? Love them? Hate them? Tell us how you feel in the comments – we’re here to listen.