Seriously, it seems like we can post about the awesome things 3D printers can do every day. From our first story about the Epson 3D printer, to recreating epic dinosaurs, 3D printing is getting a LOT of press.

Recently, Daniel Ammann, the Executive Vice President of Research and Development at u-blox, a Swiss semiconductor company, decided to create Winterfell from the incredible Game of Thrones books based on the model from the HBO series.  Ammann states, “It was the MakerBot article in Wired which brought me to the idea of buying a 3-D printer And then time over the Christmas break, together with watching the second season of Game of Thrones and the desire to learn a CAD tool sparked this project.”  A little technical ingenuity, love for a great TV show, and access to a 3D printer and voila! 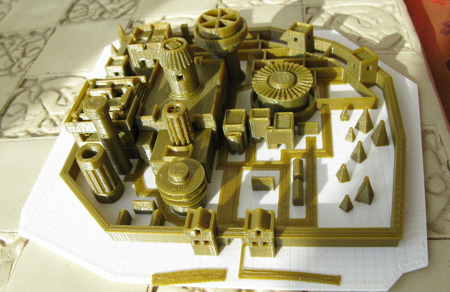 Pretty impressive indeed.  3D printing is starting to become more readily available to the general public and people are becoming more creative with the results.  What would you like to see created on a 3D printer?