CES 2013—Our guys went hands-on at the Canon booth to bring us a look at the radical new Canon Powershot N pocket camera. Canon bucked tradition and dropped the traditional rectangular, right-handed design that nearly all modern cameras employ, and instead created an all-new symmetrical, ambidextrous form factor.

The first thing we noticed about the Canon Powershot N, besides the unique shape, is the startling lack of buttons. You’ll find just four of them on the entire body, with none of them being a normal shutter release button. That task is handled by one of the large silver rings that surround the lens. Press the ring halfway down to focus, fully to snap a photo. An innovative idea for sure, but what makes it really cool is the ability to trigger from either the top or bottom of the camera. Why would you want to trigger from the bottom? We’ll get to that shortly. A second silver ring is used to zoom the 28-224mm equivalent, f/3-5.9 lens.

The rear of the camera is taken up by a top-hinged 461k dot, 2.8-inch touch-sensitive LCD that tilts out up to 90°. This tilting screen, in conjunction with the unique shutter and zoom controls, create what Canon calls “Any Way Up” operation. Fold the screen out and put the camera down low to capture a photo of an insect, without getting your knees dirty. At a concert, flip the camera upside down and hold it over your head for stage shots over the crowd. Because of the symmetrical design of both the body and the shutter release ring, there’s literally no wrong way to hold this camera. Canon encourages users to wear the N around their necks; studs on each side of the body will accommodate a lanyard.

Inside the Canon Powershot N, you’ll find a 12.1 megapixel, 1/2.3-inch CMOS sensor; pretty run-of-the-mill for Canon pocket cameras. What Canon brings to the table with the Powershot N, though, are a couple of features intended to compel share-happy photographers to use this camera instead of the one in their smartphone. One of the few physical controls is a switch that turns on Creative Mode, giving shooters a selection of Instagram-esque filters to apply post capture. The N will then display the original version alongside five other filter combinations that the camera decided “could enhance the scene or offer a different creative angle.” Users thankfully also have the ability to apply filters manually. Once done photographing and filtering, shutterbugs can use the camera’s Wi-Fi function to beam their pictures to a smartphone, or even directly to Facebook when connected to a hotspot. 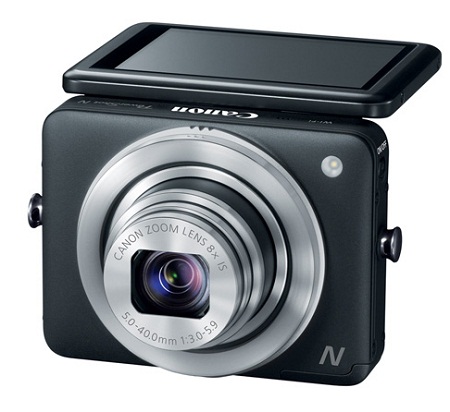 With the proliferation of smartphones that produce “good enough” pictures and easily-affordable DSLRs offering pro-level image quality, it’s hard for manufacturers to really innovate with point & shoot cameras. The Canon Powershot N is one of the new models that we feel really brings something special to the table. You get renowned Canon quality photos in a portable size, with trendy filters and easy sharing features. That combination is a great reason to slip this into your pocket the next time you go out. The Powershot N should be available this April, priced at $299.99. Get it at Abt as soon as it’s out!

Clearing the Air: Reasons to Buy An Air Purifier

MICHELE Trunk Show Returns to Abt