The Klipsch Chopper Roars Into Abt This Weekend

Are you a fan of “American Chopper,” the reality TV show that airs on TLC? If not, are you just a fan of cool stuff in general? Either way, you’ll want to visit Abt sometime between this Friday at noon and next Monday at 5 p.m., when we’ll have one of the latest creations from Orange County Choppers on display— the Klipsch Chopper.

For those of you who haven’t seen “American Chopper,” the show is centered around New York-based Orange County Choppers, a custom motorcycle manufacturer that’s run by Paul Teutul, Sr. and Paul Teutul, Jr., who founded the company in 1999. “We customize theme bikes for lots of different companies, but this one is second to none,” says Paul Sr. “It really incorporates Klipsch’s standards of high-performance, high-quality audio into a truly unique ride.” 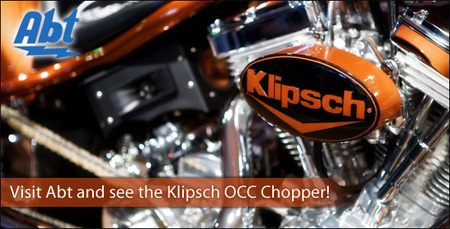 The Klipsch Chopper features the world-renowned loudspeaker company’s signature copper and black color scheme, horn and woofer assemblies, a working iPod dock, and Klipsch logos on the air filter and black leather seat. The bike is 10 feet long, weighs 600 pounds, and packs a 120 horsepower engine with 135 foot-pounds of torque.

Mike Klipsch, president of Klipsch Audio Technologies, says, “Our bike rocks—literally! For us to be part of something like this is too cool for words, but you definitely feel it once you sit on it. High performance all-around—it’s eye-catching style meeting sheer brute strength.”

Need Some Graduation Gift Ideas?
Abt To Be Featured On House Smarts TV Show
0 Comments
By Abt

Get all your best Spring Break items at Abt!

Streaming Blu-ray on Netflix? Not This Year.