Hitting The Ice With The Abt Bolts Hockey Team

As an appliance store, we sell lots of refrigerators, however that’s not the only thing we have that stays cool. Members of Abt Electronics’ very own hockey team, named “The Abt Bolts,” spend their time outside of work streaking across the ice to slap shot the puck where it belongs: right past their opponent’s goalie!

Established just this year, it is comprised of various employees and even two of the owners, Michael and Billy Abt. The team is part of the Northbrook, IL Park District Hockey organization and includes nine other teams. 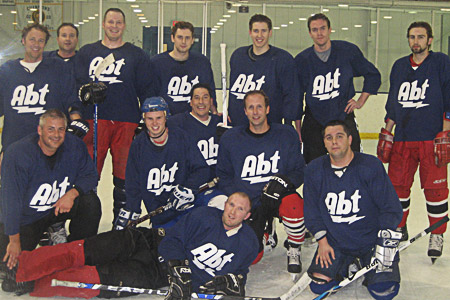 Rich Clemmensen of sales, a multi-faceted athlete whose position on the ice includes right-wing, defense, and goalie states, “All of us put together share the same passion for hockey. We’ve been involved in and out throughout our lives and we just love to play the game.”

All of the players on the team have come from some sort of hockey background. Whether it was as a member of a traveling hockey team as an adolescent, or a player for their high school or college team, each player has a history of gracing the ice with their skills and their skates.

Although their record the first year was less than stellar, captain of the team Dennis Tolmatchev says, “Losing does not take fun out of the game. The camaraderie brings the employees closer as a team, which is valuable for a family run business.”

The Abt Bolts plan on hitting the ice again next season, this time with one goal in mind: Winning.   —by Nick Eugenis

Dorm Room Must Haves with Abt on Chicago’s WLS

Come See Santa at Abt!