Abt Shows Its Support For The BBB

The Better Business Bureau of Chicago & Northern Illinois held its 82nd Annual Dinner Meeting last week at the Hilton Chicago Hotel, and several Abt employees were in attendance to enjoy the speeches, awards presentations, and of course the wine and dinner. Keynote speaker for the event was Illinois Attorney General Lisa Madigan.

Billy Abt, Lisa Madigan, Bob Abt

Among those representing Abt were company CEO Bob Abt, who served as a BBB board member for 12 years, and company co-president Billy Abt, a current board member who has served for the past two years. In 2005, Bob Abt received the BBB Torchbearer Award, which “honors an individual who makes a demonstrable effort to promote ethical business practices while assisting the BBB in its self-regulating work.” The company also is a two-time recipient of the BBB Torch Award for Marketplace Ethics. 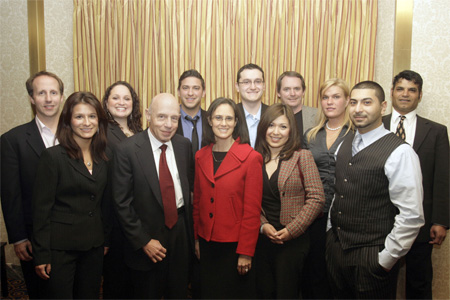 Abt employees sharing the spotlight with Lisa Madigan

An interesting side note occurred when Abt administrative assistant Melissa Albert won a raffle for a 42″ Toshiba LCD TV that was donated by one of our competitors. Melissa wasn’t sure if they would actually give it to her when they found out she works for Abt (turns out they will). “The whole thing still makes me laugh!” says Melissa.    —by Graham W.

And The Winner Is…